Byrd thanks Wallace for start in law enforcement

Christopher Byrd, a police officer with the Enterprise Police Department, credits Wallace Community College for helping him get his start in law enforcement. 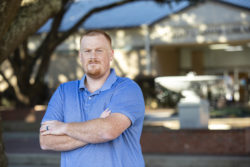 Byrd graduated from Enterprise High School in 2007, and attended Wallace Community College-Dothan in 2010 before getting his first law enforcement job with the Elba Police Department in 2012.

“Because of Wallace I am a better officer. I learned a lot at Wallace, especially from instructor Jason [Owen] and his program,” Byrd said. “I did enjoy my studies here. Legal is really important and is taught really well.”

Byrd said his instructors at Wallace fully prepared him for the next step.

“Having legal before you go into the academy is like knowing the answers before you get there, and it just makes the academy so much smoother,” Byrd said. “I think it’s really important and I did I liked it here.”

Byrd is a field-training officer with a background in investigations, traffic homicides, and drug recognition.

“I think the reason I got into law enforcement is it’s something exciting and it’s something different and you get to help people,” he said. “I love getting to help people and making a difference, especially if I can see a change in a kid’s life. That’s really rewarding to me. Even an adult that’s reoffending and we are able to talk to them and get them to do something positive with themselves and they come back and say, ‘hey, the reason I am where I am right now is because of what you said to me,’ that’s big for me.”

Byrd said Owens played a big part in helping shape him in to the officer he is today.

“I learned a lot from Jason. He has a way of speaking to his students, speaking to people in general. Because he can speak to people so well, I think that makes him a great instructor,” Byrd said. “He cares a lot about the career itself.”

Byrd entered the workforce before graduating, but hopes to return to Wallace and finish his degree.

“When I came to Wallace, I felt it is more of a close knit college than a lot of the other colleges,” he said. “I think that it’s a beautiful campus, and having it in this location where it’s not far from town, I think that’s nice.”

In addition to finishing his degree, Byrd hopes to move up within the department and advance in his career.