Raven McDonald graduated from Abbeville Christian Academy in 2003 and went straight off to a university. After a little time there, she found that it wasn’t what she thought it was going to be. 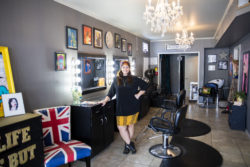 That’s when she talked to some friends about Wallace Community College – Dothan, and decided to enroll in the cosmetology program.

“It just worked out better for me to move back home. I had some other friends who were already at Wallace, and they were doing really well,” McDonald said. “It was a good adjustment to being an adult.”

Though Wallace wasn’t initially on her radar, McDonald said once she started her classes, she knew she was she was supposed to be.

“I knew four days in that I had made the right decision,” she said. “You had instructors that really believed in you and pushed you and made sure you’d get there.”

During her second semester at Wallace, McDonald was able to begin working as an apprentice and earning an income while also working toward her associate degree that she received in 2005.

“To be able to go to school and start actually working on your career pretty quick, that was … a big deal,” McDonald said. “My instructor really put me to work in that second semester – she got me a job.”

Doing hair wasn’t something that McDonald thought would turn into a career, but she is glad it did. “I really wanted to go into fashion, but I had a friend in cosmetology school and she was really happy and loving it,” she said. “I didn’t know I would do it this long, but I really fell in love with it after I started.”

She didn’t give up her love of fashion, though. Through the years of working with her customers, she began styling them and it blossomed into a new business – The Raq – which she opened this year in downtown Dothan.

McDonald said the part of her job she was least expecting to fall in love with was talking to clients, but now, that’s her favorite part.

“That was one of the hardest things for me to learn. How do I talk to these people?” McDonald said. “It turns out, that’s my favorite part of my job. Even on days I don’t feel like doing the hair, I’m excited [to talk to clients]. Hairdressing is a relationship. It’s pretty awesome.”

When business began to shut down because of the COVID-19 pandemic, McDonald said her clients had her back.

“When I shut down because of the Coronavirus, people called to check on me,” she said. “I had clients Venmo money to me in advance because they knew I needed to pay my bills.”

Overall, McDonald said the opportunities that Wallace provided her to own her own businesses has been invaluable, and she’s glad that she ended up at Wallace.

“If you want to choose a career, it’s a pretty fantastic one to go in to,” she said. “Because of Wallace I’ve been successful, I’ve made contacts with people, … I’ve had opportunities that probably wouldn’t have been given to me otherwise. Because of Wallace I’ve done things I never thought I would be able to do.”

McDonald said growing up locally, everyone hears about attending Wallace, but so many young students feel the need to go off, and don’t take advantage of the College being local.

“We see Wallace and hear Wallace so much growing up that sometimes we don’t even explore it as an option. I think that sometimes it comes with a bit of stigma that you didn’t do what you wanted to do [if you stay], but it’s such a stepping stone,” McDonald said. “I think it’s something that people locally really need to explore. Just look at Wallace.”