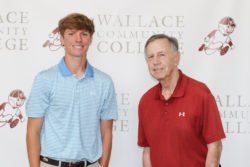 Wallace Community College-Dothan (WCCD) has awarded the 2022 Coach Johnny Oppert Scholarship to Governors baseball player Jackson Glover. The scholarship is named in honor of Coach Johnny Oppert, first head coach of the Govs baseball program as well as Wallace basketball coach and athletic director. The scholarship is given to a baseball student who exemplifies the qualities of outstanding character and athletic excellence for which Coach Oppert is known.

“We are extremely excited and proud to have Jackson Glover as this year’s Johnny Oppert scholarship award recipient,” said Govs Head Coach Ryan Ihle. “Jackson is an outstanding young man that will represent the Governors baseball team with high standards and strong morals. He has a track record of being an excellent student-athlete, stemming from his time at Wicksburg High School, and we are confident that he will continue to do so during his time here at WCCD and beyond. We could not think of a better person to receive this award and we are proud that it is being given to a local Wiregrass student-athlete.”

Glover is an incoming freshman for the Govs and is a two-way player who is expected to spend most of his playing time on the mound as a pitcher. While pitching for Wicksburg High School, he had an 8-1 record with a 2.08 ERA, allowing only 34 hits in 43 2/3 innings while striking out 72. His batting average was .380, with a .500 OBP, 21 RBIs and 19 runs scored.

On receiving the Coach Oppert scholarship, Glover stated: “I am very honored. Coach Oppert has done a lot for this community, the program and Wallace.” Glover is excited for his first season with the Govs. “Wallace is a really good program, and the coaches are awesome,” he said. Glover is pursuing his general studies at Wallace and plans to be a physical therapist.

The Govs began fall play in September. A complete schedule of games can be found at wallace.edu/baseball.