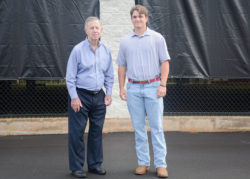 “It’s a real honor to have someone name a scholarship for you,” says Coach Johnny Oppert, “and for it to have the opportunity to change someone’s life. You never know what one person getting the opportunity to be educated can do, and you sure wouldn’t want to miss that opportunity.”

Dothan native and Houston Academy stand out Don Williams is a second-year student at Wallace. His positions are first base and outfield and he has a .396 batting average. But it’s what’s beyond statistics that led to Williams’ selection, according to Dr. Ryan Spry, WCCD Director of Student and Campus Services as well as the College’s administrator for athletics. “Don personifies the character traits of Coach Oppert,” said Dr. Spry. “It really speaks highly of his character.”

Govs Head Coach Mackey Sasser agrees. “Don is a local player who demonstrates leadership, is a good student and helps his community,” said Coach Sasser. “Coach Oppert is a great role model for student- athletes and has mentored so many in our community.”

Williams is grateful to be the first recipient. “Since I’m from Dothan, I’ve seen first-hand how much Coach Oppert has done for the community and for the baseball program,” said Williams. “It’s definitely an honor to receive a scholarship with his name on it.”

Williams has played baseball from a young age and his love of the game has inspired him to make it his career path—whether on the field or as a trainer—by continuing his education at a four-year university majoring in physical therapy and minoring in sports nutrition. “I couldn’t imagine life without baseball,” he said.

For more information on the Coach Johnny Oppert Scholarship or the Govs baseball program, please contact Dr. Ryan Spry at rspry@wallace.edu or 334-556-2587.