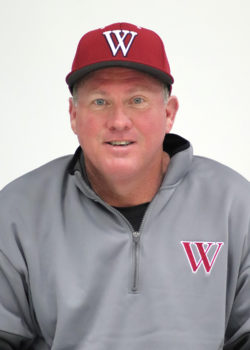 Wallace Community College-Dothan Head Baseball Coach Mackey Sasser celebrated his 800th Governor career win yesterday in the first game of a doubleheader sweep of the Coastal Alabama-East Warhawks on Thursday, April 7, 2002. Sasser, who is coaching his 25th season with Govs, entered the 2021-22 season with 779 wins.

“Coach Sasser’s 800th victory is yet another example of his unique ability to pursue excellence and sustain success through the years,” said Dr. Ryan Spry, WCCD Director of Student & Campus Services and Assistant Director of Men’s Athletics for the Alabama Community College Conference. “For over two decades, Mackey has led our baseball team the right way – developing young men on and off the field – and I could not be more proud of him for all that he has accomplished at the College.”

Sasser was named WCCD’s head coach at the beginning of the 1997-1998 baseball season. Starting the 2011-2012 season, Coach Sasser was named the Athletic Director for all Govs’ sports. Under Sasser’s leadership, the Govs recently finished runner-up in the 2021 NJCAA Region XXII tournament.

Coach Sasser has been named Conference Coach of the Year six times and led the Govs to the Conference Championships in 2000, 2003, 2004, 2006, and 2017. Under Coach Sasser, the Govs were NJCAA Region XXII Champions in 2017 and Conference Runner-ups six times.

Coach Sasser grew up in Tallahassee, Florida, and attended Wallace Community College from 1981to 1983. One of the top JUCO prospects in the Alabama area, Sasser led the Govs to a State Championship in 1983. He signed with the San Francisco Giants organization after being drafted in the second round of the January free-agent draft in 1984. Coach Sasser played three years in the Giants Minor League system. He was named Team MVP for all three years and Topps Minor League Player of the Year in 1985. Coach Sasser spent nine seasons in the MLB with the Giants, Pirates, Mets, and Mariners.